12/11/2011
I really enjoy the photographic technique of painting with light. Thus, keen to further my portfolio, a friend and I went to Chesterton Windmill one night this week...

The last time I went to Chesterton Windmill (in Warwickshire) was in late August/ September this year and, much to my annoyance, the damn thing was covered in scaffolding!

Before we went this time, I did my homework and worked out from photographs on flickr that it was definitely now free from supports.

We arrived about 7.30pm and went up to the windmill armed with our canon and nikon a torch, flash light, portable flash, tripod and shutter release.

The main problem with photographing the windmill is that the sails are currently facing into a very very muddy field, thus making it far from easy to take pictures of particularly in the darkness of night.

However, the nights sky was perfect and so we yomped into the field, placed our tripods, torches flash and flasks (it was very very cold) in position and began to take a few photographs.

The moon was extremely bright and thus getting the correct exposure was not instantly easy and we took pictures over 2 minutes to 6 minutes using the torches and flash over varying periods within that time limit.

The clouds were in situ but were not moving as much as we would have liked and thus we did not get that great streaming effect that one gets with a long exposure.

However, I was well pleased with the photo's I got which once again show the beauty that can be achieved by painting with light. 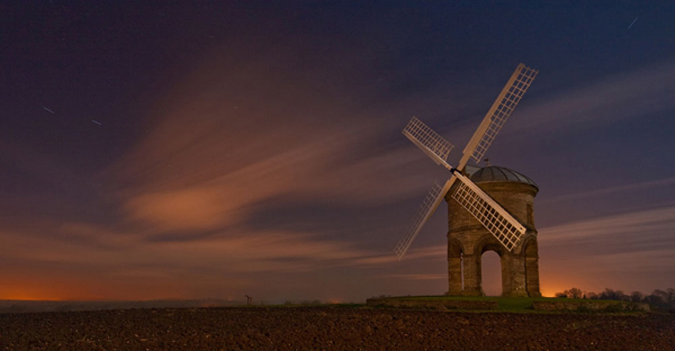 Here is some further information about the windmill from Wikipedia:

The windmill is one of Warwickshire's most famous landmarks, standing on a hilltop overlooking the village of Chesterton for nearly 350 years, near the Roman Fosse Way and about five miles (8 km) south-east of Warwick.

It was built in 1632-1633, probably by Sir Edward Peyto, who was Lord of the Chesterton Manor House. At this time John Stone, a pupil of Inigo Jones, was in Chesterton, designing the new Manor House, and he probably helped with the Windmill as well. It is the earliest tower mill in England to retain any of its working parts.

It is built of hard local limestone, with sandstone detailing, on a shallow platform of 71 feet 9 inches (21.87 m) in diameter. The mill tower with a cap height of 36 feet (11 m), unique worldwide in structure and mechanics, is supported on six semicircular arches, on piers, the outer faces of which are arcs of circles radiating from a common centre.

A sandstone string course surmounts the six arches and runs round the tower, below the windows. There are four windows in the tower, two small and two much larger with stone mullioned windows. A three-light window set in the roof on the opposite side to the sails, has a small plaque above it with the letters "E. P. 1632".

It seems the mill has undergone three major reconstructions, one in 1776 when the mill shaft was modified, and the date carved in the tail of the shaft, and one in 1860 when the old curb and cap framing was altered.

By 1910 it had ceased to function as a mill because the winding gear failed to operate, so that her last miller, William Haynes, was no longer able to turn the mill's cap round to make the sails face the wind. He abandoned the mill and moved to Harbury tower mill, one mile to the east.

In the 1930s the mill was sometimes used for milling at properous winds. Minor repairs to the sails and the wind vane took place. In the early 1950s one sail broke off and was restored years after.

It was not until 1969 that a larger reconstruction of Chesterton Mill began again under the control of Warwickshire County Council, now responsible for its upkeep, and the reconstruction of the machinery. The windmill repairs were finished in 1971, and the mill reopened for a few days to the public each year in summertime (volunteers from nearby villages help run the open days and provide stewards for the event).

In 2006 one of the sails fell off the windmill during an open day, injuring one visitor. Initially, following the incident, the area was roped off to prevent visitors approaching the windmill. The sails themselves were then removed for strengthening. They were finally replaced in late 2007.
Next
Previous