The beauty of the Thames, Port Meadow at sunrise

21/01/2012
A frosty Thames, a low lying magestic mist and a beautiful sunrise over Port Meadow, Oxford 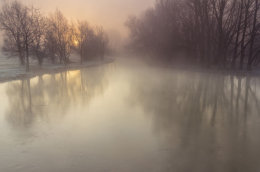 The Path into Beyond
I have been commissioned by a friend to get a photograph of those all to famous spires of Oxford at sunrise. No easy task, I have gotten up early two Saturdays in a row, 7 & 14 January in an attempt to take the commissioned snap.

Armed with my new Camera 600D and its fantastic Live View, my first attempt to get this shot begun by climbing Boars Hill.

Boars Hill is a beautiful spot SW of Oxford which gives you an amazing view back over Oxford - I would recommend it to anyone wanting an amazing view on a clear day. Whilst the eye captures the majesty of the scene, my camera didnt sadly for two reasons...

The first was the distance. Whilst to the naked eye you get an amazing panaroma the camera lens just can not capture that same majesty for Boars Hill is probably 1-2 miles from the centre. Using my Sigma 135-400mm lens did assist, but not enough and the picture still felt 2D and very flat.

The second problem was down to the weather and the angle of the sun. In short, both werent on my side. The sun rose over Sunningwell, not Oxford, and the weather was flat, cloudy and the sun was barely visible.

Whilst I took some perfectly nice photos, I left flat and dejected with no picture for my pal and a feeling of disappointment not to mention tiredness!

After giving up I drove up the A34 to see what other locations might achieve the required shot. Hinksey Hill Golf Course is certainly a great location as, it appeared, was Port Meadow, having parked the car in the Wolvercote car park at the top of Port Meadow and taken a quick stroll.

For those that dont know it, Port Meadow is a large meadow to the North of Oxford. The Thames runs through one side and the Oxford Canal the other. In the winter, it is largely under water but defined footpaths allow you to get around without getting your socks wet.

My trip to Wolvercote in mind, the following Saturday I got up at 0600, got the kit ready and drove to Jericho for 0715. The weather when I got there was clearly going to be on my side. There was a beautiful mist, a heavy frost and you could see the sun would rise to fill the scene with gorgeous golden light over the city.

As it rose, it was clear the sunlight was beautiful in the way it caught both the frost and the mist. I knew that provided the dog walkers and runners did not get in to view, I would get some lovely shots. I was right to be excited - the mist mixed with the light produced some stunning results.

To get the balance right, I used my Hi-Tech ND Grad and that allowed me to balance the light of the sunrise with the darkness and mist of the foreground.

The hard work was done by the light and the setting, all I needed to do was stand there, compose and take the picture. So, whilst I didnt get the shot of those elusive spires, I came away with some pictures I am delighted with and some of my best ever in my opinion.

I have posted one of the pictures to this article and the remainder are in my waterscape section.

I hope you enjoy them as much as I do and your feedback is always welcome. 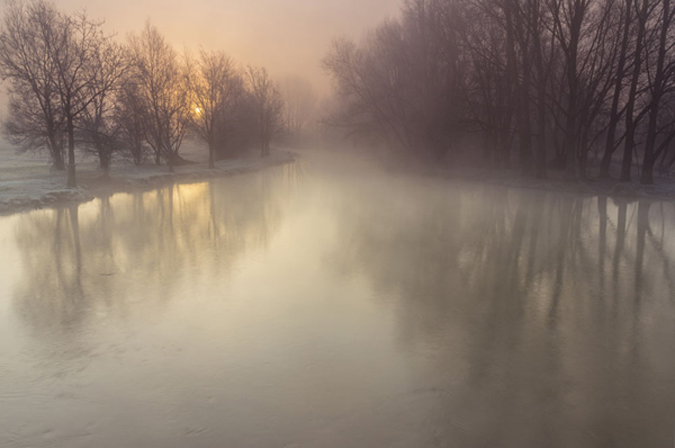 Port Meadow is a large area of common land beside the River Thames to the north and west of Oxford, England.

The meadow is an ancient area of grazing land, still used for horses and cattle, and has never been ploughed. In return for helping to defend the kingdom against the marauding Danes, the Freemen of Oxford were given the 300 acres (120 ha) of pasture next to the River Thames by Alfred the Great who founded the city in the 10th century. The Freemen's collective right to graze their animals free of charge is recorded in the Domesday Book of 1086 and has been exercised ever since.

It runs from Jericho to Wolvercote along the east (left) bank of the River Thames, with the railway and the suburb of North Oxford further to the east, and the village of Binsey to the west. Access to Port Meadow is via Walton Well Road or Aristotle Lane in the south or from Wolvercote in the north. It is a typical English flood-meadow and is a favourite area for walking, with easy access from the city of Oxford. It is also a Site of Special Scientific Interest. At the southern end of the meadow is Fiddler's Island in a loop of the River Thames. In the winter the meadow floods and if frozen forms a huge and safe area for skating. In late spring vast areas are carpeted with buttercups. Horses, cattle and geese graze the meadow and many birds can often be seen.

The River Thames (known as the Isis at this point) flows through this large grazing meadow. This is where the Reverend Charles Lutwidge Dodgson (aka Lewis Carroll) and the Reverend Robinson Duckworth rowed in a boat on July 4th 1862 up the river with three young girls — Lorina, Alice, and Edith Liddell. While journeying slowly from Folly Bridge to near Godstow, Dodgson began at their request to make up a story that later was expanded into Alice's Adventures in Wonderland.

Because the meadow has never been ploughed, it contains well preserved archaeological remains, some of which survive as residual earthworks. Of particular note are several Bronze Age round barrows, an area of Iron Age settlement, and the foundations of 17th-century fortifications from the Parliamentary siege of Oxford during the English Civil War.

In the 17th and 18th centuries the meadow was used for horse racing, and low stone bridges laid over washes and ditches for this purpose still survive.

During the First World War part of Port Meadow was used as a military airfield and the Royal Artillery had a base there. In 1940, during the Second World War, a camp was set up on the meadow for military personnel evacuated from Dunkirk.

In the southwestern corner of the meadow at Medley is Bossom's boatyard, a small marina and Medley Footbridge across the Thames. The Medley Sailing Club, the furthest upstream sailing club on the River Thames, is on the western riverbank.
Next
Previous