It was only a Winter's Tale

Broadway Sunset
Ever popular with photographers from near and far, I took the opportunity to drive west and photograph the Broadway Tower a couple of weeks ago.

Whilst its a stunning landmark, it is not an altogether easy place to photograph due to the number of men, women, children, dogs and blessed photographers! It is also difficult to compose a nice picture to include both the stunning background of the Malverns and the Tower itself, keeping that on the thirds of course.

I stayed for about 3 hours and as the sun went down, the shots acquired a certain drama and I ended up pleased with a handful of those I took. It being flippin freezing a handful was enough for me so it was off to the nearest pub to warm up and inspect the days work.

Broadway Tower is a folly located on Broadway Hill, near the village of Broadway, in the English county of Worcestershire, at the second highest point of the Cotswolds after Cleeve Hill. Broadway Tower's base is 1,024 feet (312 metres) above sea level. The tower itself stands 55 feet (17 metres) high.

The "Saxon" tower was designed by James Wyatt in 1794 to resemble a mock castle, and built for Lady Coventry in 1799. The tower was built on a "beacon" hill, where beacons were lit on special occasions. Lady Coventry wondered if a beacon on this hill could be seen from her house in Worcester - approximately 22 miles (35 km) away - and sponsored the construction of the folly to find out. The beacon could be seen clearly.

Over the years, the tower was home to the printing press of Sir Thomas Phillipps, and served as a country retreat for artists including William Morris and Edward Burne-Jones who rented it together in the 1880s. 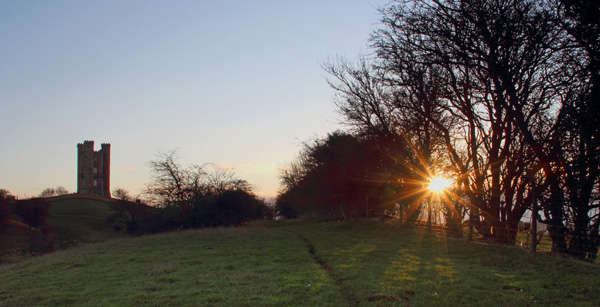