05/02/2012
I wanted to take a day trip to the coast, and after reviewing a few respected landscape photographers' websites, I elected for West Wittering. What I did not elect for was the most horrendous driving conditions on the way home.

Shades of the Solent
I wanted to take a day trip to the coast, and after reviewing a few respected landscape photographers' websites, I elected for West Wittering. What I did not elect for was the most horrendous driving conditions on the way home. I knew snow was coming, I just wasnt expecting a blizzard.

West Wittering is a small village and civil parish, on the Manhood Peninsula, in the Chichester district of West Sussex, England. It lies near the mouth of Chichester Harbour southwest of Chichester. West Wittering has a sandy beach with excellent water quality (it has a blue flag for its quality) and a colour I have only ever seen in the mediterannean.

Along with amazing golden sands, it also has a great deal of wildlife both at east head and along the beach itself. Although I had my eye on the landscape, I saw 3 or 4 Oystercatchers and a handful of Dunlins.

The tide was out when I was out. This gave the beach a somewhat surreal feel because the groynes which protected the beach from the effects of longshore drift seemed to be landmarks rather than important components in the protection of the beach and the beachhuts at the back of the beach. Indeed for the 4 hours I was there the waves didnt once reach the arrowhead at the front of the groynes. A passer by told me that the effects of the sea has been such that many of the groynes are now largely permanently under the sand.

The groynes made for perfect lead in lines and perfect local points for any picture. Therefore, I tended to focus on them, putting them on the third, when composing my picture. I tried on numerous occasions to capture the scene with my Hi-tech 10 Stop ND Filter but the clouds were simply not moving so the picture did not create the effect it so often can. This was odd in many respects because it was blowing a gale for much of the day.

Whilst trying to capture the "usual" pictures, I also wanted to try to get a style of picture I have been meaning to take for some time. The picture is achieved by effectvely panning your camera across the scene on a tripod over a period of about 1-2seconds. When it works you capture an array of colour similar to that of Isle of Wight sand - the golden foreground, the blue mid ground and, in this instance, the dark sky. I took a good few and many didnt come out as planned but I love those that did, such as the one below: 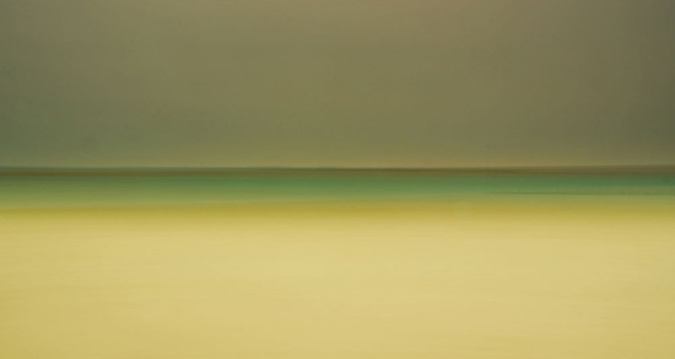 A great day was brought to an early close when the rain came, arriving before any sunset too which was annoying that being half the reason I wanted to go to the coast. However, with snow in the weather forecast, indeed, heavy snow, I took the view that 4 hours was plenty and it was time to go. Armed with my Good Pub Guide and with Scotland v. England just kicking off, I thought however I would stop a good pub en route - I chose the Fox & Hounds in Crawley, minutes from the A34 and not far from Winchester. It was a great pub, with some great beer - I went for the Ringwood best and even better, I saw the last 20 minutes of the rugby which England won.

Whilst it was snowing when I arrived, it was "blizzarding" when I left. I shall not bore you with the details but needless to say my heart was in my mouth for much of the 1 hour drive home from the pub. The gods were on my side!
Next
Previous