Happisburgh, Norfolk – The Power of the North Sea and the failure of its Coastal Defence

23/02/2012
Prior to visiting Happisburgh, I had assumed it was a picture perfect Norfolk village with great opportunities for landscape photography and an iconic lighthouse... 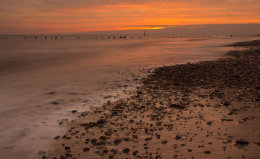 Happisburgh, Norfolk – The Power of the North Sea and the failure of its Coastal Defence

Prior to visiting Happisburgh, I had assumed it was a picture perfect Norfolk village with great opportunities for landscape photography and an iconic lighthouse. However, what I was met with was a village teetering on the brink in every sense of the word. A number of houses have fallen into the sea in the last 10 years, the existing Beach Road is falling into the sea, the “old” car park has had to be moved due to coastal erosion and the iconic church is due to fall to mother nature by 2020.

To say that my perceptions of Happisburgh were changed in an instant is an understatement.

There is plenty on the internet about the past as well as the future of Happisburgh and, in particular, the government’s policy of “managed retreat”, see for example, http://www.happisburgh.org.uk/ (the voice of the Coastal Concern Action Group).

I do not currently know enough about the situation to substantively comment but it seems a grim reality if towns are saved or left to die by reason of their economic worth. To put this into context Bacton and Sea Palling along the coast are being spared, Happisburgh and Eccles-on-Sea are being left to die.

I would encourage all of you reading this to read up on the situation and consider for yourself an issue that affects us all of us in the UK. I know I shall be doing so.

The photographs I took seem almost irrelevant given the plight of local residents and those that have lost their livelihoods. Indeed, it seems the ultimate irony that the feature that makes Happisburgh such an alluring place is what is destroying it.

Happisburgh had revetments, coastal defences made of wood, put in place in the 1950’s. Bits of those revetments remain in situ, but they are very much bits, owing to major storms in 1990 when a storm demolished 300m of revetment running south-east from the village. Once the gap appeared, the sea got stuck into the agricultural land behind and has been gnawing away ever since, helped by another storm which later sent six village edge properties to the beach.

The revetments create the striking image that features in many photographers’ images of Happisburgh. To the landscape photographer they create an excellent foreground, good lead in lines and focus for the picture generally. They also create works of art when used with a 10 Stop Filter.

Like so many places on the east coast, an early start is required if you want to capture the real magic. I rose at 0530 and by 0620 could see that it was going to be a cloudy but gorgeous sunrise – I found myself considering whether to stop on many occasions to capture a beautiful landscape or awesome windmill but remained resolute that I wanted to get to Happisburgh. 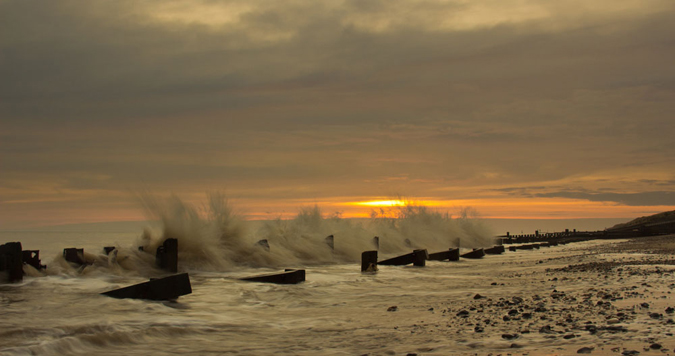 For those of you who want to capture Happisburgh at dawn, go there in daylight first. The cliffs are eroding and, whilst not dangerous per se, they are extremely precarious if you do not know where you are or the risks that are present. I can not emphasise this enough – I was grateful to have been the day before and you should do likewise if you are unfamiliar with the cliffs and Beach Road.

Once parked, I headed for the far end of the beach towards the area of revetments that flit between battered and bruised, on their last legs and eroded altogether.

The beach itself is quite long and with the sunrise very much flitting behind the clouds I took a variety of shots throughout the morning but it was those taken very first thing (around 0650 – sunrise was at 0658) that really caught the beautiful pink – orange – red sunrise.

With the sun rising I moved further up the beach to those revetments which were very much intact. My aim was to photograph the powerful waves exploding on the sea defences to capture the power of the sea in the stunning landscape in front of the still alluring sunrise. I took a handful of this type of picture (see above) and got a good variety of images using shutter speeds of between 1/6 and 0.6 seconds.

Having taken pictures of the waves breaking on the revetments and with the sun up, I then turned to the Hi-Tech 10 Stop filter. The battered revetments made the perfect subject and an exposure time of over 2 minutes made the sea beautifully still giving the images an ethereal feel. I took about a dozen of these pictures, mostly head on but with some at around 30 degrees. Sadly the sky was dull by this time and with no clouds to stream through the pictures I focused most on the revetment and sea only. However, I have no complaints about the lack of sky, I am really pleased with the outcome and happening upon a well known local landscape photographer later that morning, he agreed that he too would be well pleased with the pictures which I was well chuffed with.

I hope you like the pictures I have taken. I hope you also spare some time to read up on the plight of Happisburgh, east Norfolk and the east coast generally. 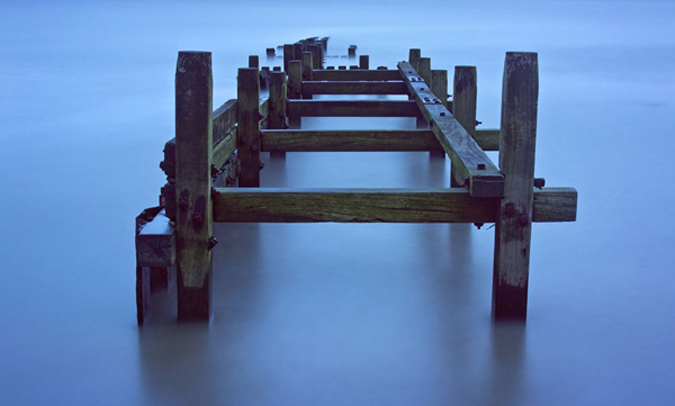