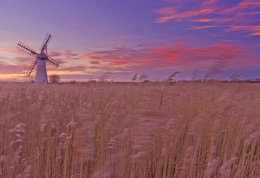 The Sun Sets over Thurne
The tiny village of Thurne is a small riverside broadland village that either gives or takes its name from the River Thurne. The River Thurne flows southwest and is linked by Candle Dyke and Heigham Sound to both Horsey Mere and Hickling Broad. It continues southwest through Potter Heigham (passing under its medieval bridge) and enters the River Bure just south of Thurne Dyke, near St. Benet’s Abbey.

The Grade II Listed Thurne Drainage Mill stands at the head of the Thurne Dyke and is owned by the Norfolk Windmills Trust.

The Thurne Drainage Mill or Thurne Dyke windpump was built in 1820 as a two-storey mill, but a third storey was added in the middle of the nineteenth century. The mill stopped operating in 1936, and gradually became derelict until it was bought by Bob Morse in 1949. Mr Morse started to restore the Mill with help from Albert England, a descendant of the original builders. Morse was assisted by the Norfolk Mills Trust from 1975, who funded the fitting of some of the shutters to the sails in 2002, enabling the mill to turn under wind power again.

Whilst in the summer, Thurne and its windmill are the focal point for many many tourists, in February it is the scene of a beautiful stillness and calm. Only a handful of local walkers, boaters and photographers wander by to admire the beautiful mill, the stunning broads and the sounds of nature. I would recommend it to anyone.

I arrived at Thurne about 2 hours before the time stated for sunset to get some pictures of Thurne, Thurne Windmill and St Benet’s Mill. The skies were set to a winter blue, the bulrushes were blowing in the gentle breeze, the broads were perfectly still and the scene perfectly set.

At the outset I wanted to capture the full width of the landscape from Thurne Dyke Windmill on one side to St Benet’s windmill (and beyond) on the other with the broads leading the eye down the scene. The bullrushes blowing the wind made for a great foreground and gave an additional dimension to the remainder of a landscape which is so often photographed. The main difficulty I found with this scene was that the Sigma 18-200mm lens which I was using was distorting at its edges making Thurne and St Benet’s Windmill somewhat distorted which then correcting in the Photoshop lab when I got home. 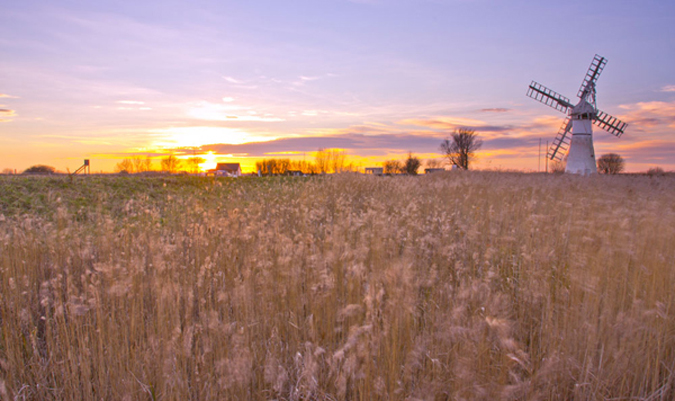 Once I had taken the wide angle shots, I focused on St Benet’s and then Thurne. The difficult with photographing St Benet’s from the Thurne side of the river was that there isn’t really any strong foreground interest. Accordingly, whilst there is many a nice shot to be had, I didn’t have the bullrushes or other foreground “props”/ lead in lines that I could use when photographing Thurne. That said, whilst I turned my attention to Thurne two well equipped Canon photographers stayed very much focused on St Benet’s.

Not having a boat to get to the other side, I was slightly hampered by the angle of the windmill but as it turned out, whilst the sails were against me, the scene made for some great photographs.

The sun gradually set over the windmill, I took a number of photo’s from a number of angles and given the range high contrast of the scene and the difference in light between the sky and land I took multiple bracketed exposures to create HDR images in the lab as well as using my Hi-Tech ND Graduated Filter to create my preferred shot there and then.

I hope you like the pictures I have taken which can be seen in this article as well as in my galleries.

As regular readers of my articles will know, I tend to end my trips in a pub featured in the Good Pub Guide. This trip was no exception and the chosen pub was absolutely fabulous, namely the Vernon Arms in Southrepps (http://www.vernonarms.com/). It had a fab array of beers, Spitfire, Adnams Broadside, Black Sheep Ale and Abbot Ale – I was forced to sample a half of each and well in taste terms it was a tie – they were all well kept and tasted great! As it goes there is a pub in Thurne, The Lion Inn. Unfortunately, the pub (http://www.lion-inn-thurne.co.uk/) felt a little tired and whilst the staff were friendly and helpful the decor needed some TLC and my beer wasn’t the best. It’s probably lovely in summer when the sun is out and you can sit out front, but the Vernon Arms wins every time for me.
Next
Previous