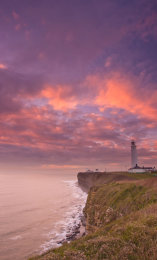 Nash Point is a headland and beach on the Monknash Coast which leads to the Llantwit Major Beach in the Vale of Glamorgan, South Wales. It is a relatively unknown location to many but popular with photographers, walkers and geologists.

It is an idyllic yet relatively unknown landscape which must be seen to believed.

Nash Point is also famous for its striking white lighthouses. Nash Point Lighthouse was designed by James Walker in 1832 to mark the sandbanks off the point at the entrance to the Bristol Channel. It was the last manned lighthouse in Wales but in 1998, like the vast majority of lighthouses, it was changed to automatically operation.

The site extends from the western side of St Donat's Bay (SS 934 677) to Cwm Nash (SS 905 699). To the east of Nash Point, the continuous line of cliffs is broken by the valley of the Marcross Brook.

The coastline of the Vale of Glamorgan is mostly formed of cliffs cut in the Lias limestones and mudstones and it is the softness of the limestone and mudrocks of the Blue Lias that has carved out the amazing rock formations that make Nash Point a very striking and inspiring place to visit.

Those cliffs, which feature prominently in photographs of Nash Point on places such as flickr and recently in Digital SLR Photography magazine, are near vertical and vary in heights of 30 to 62 metres. The intertidal platforms which create the fantastic foregrounds and excellent lead in lines are generally between 200 m and 250 m in width.

The platforms at Nash Point are strongly related to the dip of the strata, their surfaces being structural, whereas on the Somerset coast they are cut across steeply dipping strata. Although caves are a common feature of many cliffed coasts, few are described in the geomorphological literature, and Nash Point is an exception. 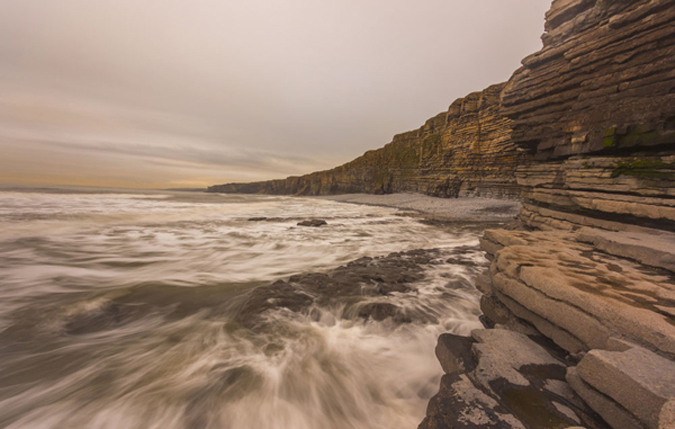 The decision to build Nash Lighthouse followed a public outcry after the passenger steamer FROLIC was wrecked with heavy loss of life in 1830.

Two circular towers were built each with massive walls and a stone gallery. The eastern, or high lighthouse is 37 metres high and the western or low lighthouse 25 metres high. Placed 302 metres apart they provided leading lights to indicate safe passage past the sandbanks. The western lighthouse displays a light, group flashing white and red every 10 seconds, which can be seen 21 miles away.

The high light was originally painted with black and white stripes and the low light was white. When built, both towers showed a fixed light which was either red or white depending on the direction from which a vessel approached. The red sector marked the Nash Sands.

The low light was abandoned early this century and the high light was modernised and painted white. In place of the fixed light a new first order catadioptric lens was installed which gives a white and red group flashing.

Nash Point Lighthouse is one of those lighthouses scattered around our coast that has no claim to fame. For over 160 years its light has done its job as a sign to mariners to keep them clear of danger, its sole distinction is the discovery in 1977 of the tuberous thistle (Cirsium Tuberosum), a rare plant, which was found growing around the lighthouse.

Using the Photographers Ephemeris we planned our trip to coincide with the sun setting towards the western end of the cliffs. Unfortunately, whilst the angle of the sunset was on our side, the tides were not. Not having been to Nash Point before, however, and viewing various pictures of Nash Point on Flickr and Google Images, it appeared that high tide would not be a barrier to getting some great photographs of a great location. Unfortunately, whilst I got some great shots, the tides are viciously fast and meant our ability to photograph the sunset and the amazing limestone rock formations was severely hampered. To all those planning to go at high tide, please be very careful. It is dangerous and the dangers are plain for all to see, so take care.

With the tide coming in and my waterproof Berghaus boots primed for action, I spent the first hour or so taking pictures of the waves crashing over the rocks. Slowing the shutter speed down, I then took a number of photographs to give those powerful waves an ethereal feel and give the picture an added dimension. The difficulty with taking these shots was that to get a strong image you had to adopt a low viewpoint and to get a low viewpoint you & your camera are at risk of a soaking and I got one, or four...

The beautiful limestone pavements create a vivid foreground and some fine lead in lines with the smaller outcrops of rocks creating vertical interest. The backdrop of the main headland then created balance for the picture and a strong landscape image.

Once I had taken a few shots I was happy with I then turned 180 degrees to take pictures of the lighthouse and the limestone and mudstone platforms that sit beneath it. As the light wasn’t as strong and the sky had clouded over, I decided to switch to the Hi-Tech 10 Stop Filter to create those beautiful images of a milky sea setting over the vast rugged landscape. I used a number of different angles using my Sigma 10-20mm wide angle lens and was really pleased with the outcome which can be seen in my waterscape gallery and below. 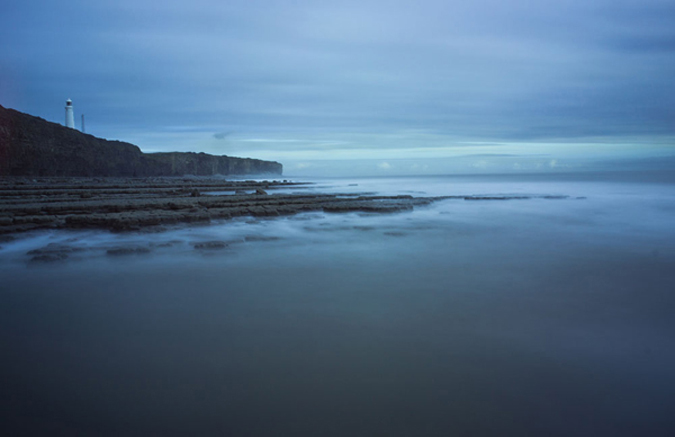 With the tide whipping in, we then started to heads towards the safety of higher ground and the cliffs for which Nash Point is famous. The tide made this difficult in the end and with the clouds settling over the sky, I settled for further shots of the waves crashing over the western end of Nash Point and a final few 10 Stop Shots.

Once off the beach, we then returned to the cliff top and walked down to Nash Point Lighthouse. As we said, the sun broke through and suddenly it was apparent we would see a great sunset after all.

I took various shots of the western lighthouse using multiple bracketed exposures in order that I could create some HDR images when I returned home. I also took some straight shots of the lighthouse but to control the different in the light between the sky and the land, I used a 0.6ND Hard Graduated Filter.

The clouds and sky made an already fantastic landscape even more majestic and I left extremely contented.

I left with a promise to myself to come back... when the tide is going the other way!

As ever with my trips, before returning over the Severn Bridge, I opened the Good Pub Guide and chose a nearby pub to relax and enjoy a nice pint of welsh bitter. Trust me when I say that the Plough and Harrow in Monknash (http://www.theploughmonknash.com/whattheysay.htm) is as good as they come. Great beer, great food, great atmosphere.

I left the pub with a promise to myself to come back... irrespective of the flipping tides!
Next
Previous