Since I last updated my site, I have got married and been on honeymoon, which was nice.

Our honeymoon was originally intended to be a round world trip. However, with the recession biting deep, the wedding costing more than planned and camera lenses being more expensive than I thought we decided that West Wales may be preferable to Mauritius, South Africa, Australia, America, Canada and Iceland. Frankly who wouldn’t.

Whilst Wales may not have the size and depth of many of the above named (and less Lions), Wales has undeniably beautiful landscapes, wide golden sandy beaches and deep red sunsets.

It being our honeymoon, the focus of our week away was not capturing the beauty of the area at sunrise or sunset. However, the light on one particular day was such that I had to find a way of getting up to Tywyn to capture the moments before and during the setting of the sun. The promise of pink fizz and dinner managed to buy me a couple of hours and off I went.

It’s safe to say that whilst I have been to much of Wales, I have never been to Tywyn before. Tywyn (formerly Towyn) is a town and seaside resort on the Cardigan Bay coast of southern Gwynedd. The name derives from the Welsh tywyn ('beach, seashore, sand-dune') and the town is sometimes referred to in Welsh as Tywyn Meirionnydd. To the north of Tywyn lies the mouth of the Afon Dysynni, to the north-east the rich farmland of Bro Dysynni and the village of Bryn-crug, and to the east the hills of Craig y Barcud and Craig Fach-Goch.

The geology of the area is that of Ordovician rocks to the north and around Tywyn which give way to Silurian rocks around Aberdyfi and Borth. Windblown deposits/dunes form a strip along the coast, mainly to the south, backed by alluvium on lower areas. This creates for beautiful sandy beaches and long flowing sunsets.

The beach at Tywyn is dotted with groynes and at the end of those groynes is the distinctive pointed arrowhead which made West Wittering so striking (as featured in my entry “A Trip to West Wittering and a Rollercoaster of a Trip Home” – see recent photo trips). The groynes and arrowhead make great lead in lines, sit perfectly on the third and help create depth and give a sense of scale to the landscape. They also helped make what would be a nice scene into a truly awesome one.

I started further down the beach with my Canon 28-135mm but it became evident that those pictures lacked enough focus in terms of composition, so I switched to my 17-40mm and started to work on one particular section of the beach.

As the sun started to set and the tide started to sweep in, I tried to capture a series of pictures detailing both the setting of the sun, the purple-blue-pink-red skies and the sweep of the tide coming in. This proved harder than anticipated because the spray coming off the sea kept covering my lens with fine spray which needed constant cleaning and drops of rain had started to appear in the sky. 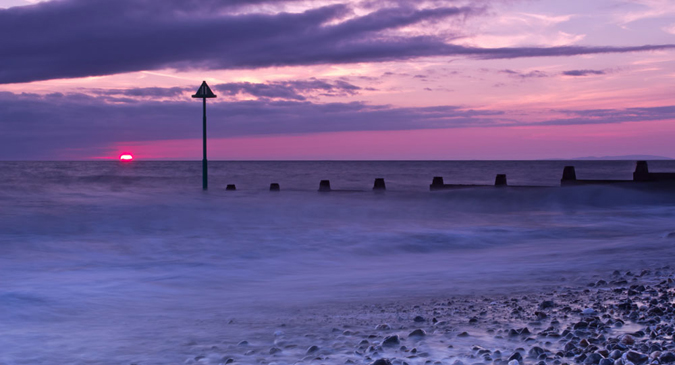 I spent about an hour on the beach and took a variety of pictures and a number of those are uploaded on my waterscape gallery as well as detailed in this article.
Next
Previous