A day trip to Barmouth and a sunset in Fairbourne

28/08/2012
Ever since I was young, and with nearly all of my family holidays spent on or near the seaside in Wales... 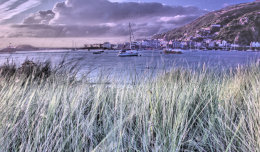 Ever since I was young, and with nearly all of my family holidays spent on or near the seaside in Wales, I have wanted to go to Barmouth and 30 odd years since I was young I finally made it there.

As a youngster I was fascinated by steam trains like the Flying Scotsman, Mallard and the Nigel Gresley. From learning about the evolution of steam trains, I became aware that there was a coastal line in West Wales which runs parallel to the coast and what is more, crosses what to me at the age of 7 was a river the size of the Amazon, but which was actually the mouth of the Mawddach Estuary. Add in to the mix that Barmouth was a popular seaside town with arcades, Candy Floss, fish and chips and souvenir shops and I was transfixed by the place. 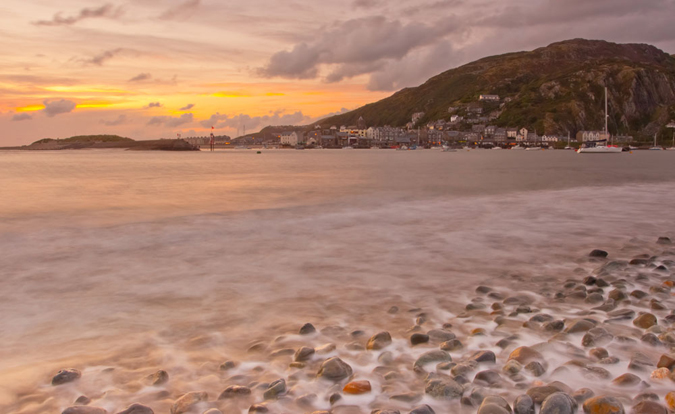 Before going to Barmouth, I read up a little on the place and let’s just say the descriptions didn’t fill me with hope. However, I really liked it. Like so many seaside towns in the UK it has suffered from the massive drop in tourist numbers and, although I am speculating here, rising unemployment leading to reduced income and thus less money being spent in the local area. This has led to an obvious change in the town but for me it is not one that makes Barmouth any more enchanting than it was to me as a youngster.

We spent a few hours there wandering around the shops, spending a lot of 2p’s in the arcade and generally enjoying the scenery and sweeping sands of the coast. However, I really enjoyed sitting at Snowdon View with Fish and Chips from the fantastic Harbour Fish Bar on Church Street, and then having a very nice pint at the Last Inn further down on Church Street. What made each of those a particular delight was that both pub and Snowdon View overlooked that bridge I had seen as a kid and which left me with such a lasting image in my mind about this place called Barmouth which at the age of 7 seemed as far away now as Hawaii.

On the way back from Barmouth I stopped in Fairbourne to take some pictures of the estuary and the sun setting over the town. It is not an altogether easy scene to shoot as there aren’t many lead in lines (particularly so when the tide is high as it was), and, it being summer, there were loads of holiday makers on the beach – all this didn’t make for the best pictures. However, using variously the sand dunes, the pebbles as the tide lowered and the sea as my foreground interest, and using an ND Graduated Filter or two (the sun was extremely bright) I began taking various shots of the beautiful scene.

What I really loved about the view back to Barmouth was the fact that you get beach, harbour, estuary, town and mountains in one picture. It is a view to die for and one which, camera or no camera, should be enjoyed however young or old. That said, it’s not the easiest image to compose with so much going on and I plan to head back, possibly later in the year when the sun sets slightly further back and lower in the sky… 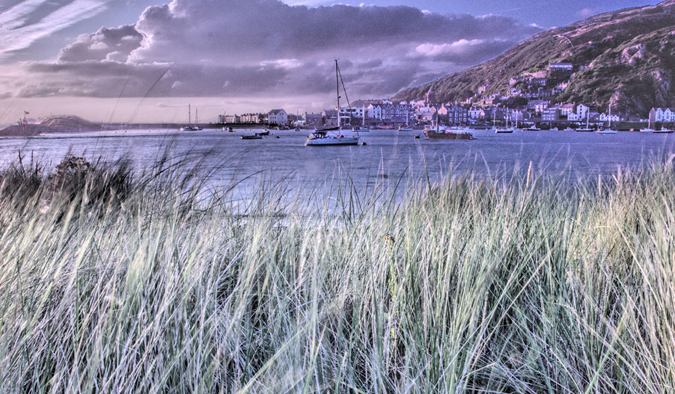 As ever with my photo trips I opened the Good Pub Guide and found a pub to finish the day in. I can safely say that the recommendation of the Penhelig Arms in Aberdovey/ Penhelig is a fine choice. Great beer, great food and good service made for a great couple of hours.

If you want to read on, I have set out some information on Barmouth and Fairbourne and that railway:

Authorised in 1861, the railway was intended to run between the Cardigan Bay towns of Aberystwyth and Porthdinllaen near Nefyn on the Lleyn Peninsula. Work began at Machynlleth, and the line was opened through to Aberystwyth in 1864. However, the planned Dyfi bridge at Ynyslas proved impracticable, requiring the divergence between the Aberystwyth and Coast lines to be moved 6 miles east to Dyfi Junction. This added 12 miles to the journey north from Aberystwyth, but the twisting line – just a few feet above high tide level - between Dyfi Junction and Aberdyfi remains one of the most scenic sections of railway in Britain.

For a time before completion, southbound passengers detrained at Aberdyfi and were carried over to Ynyslas by ferry, for which a short temporary branch was built for use at low tide. Major works on the line included the bridge south of Barmouth and the cliff top line at Friog. This latter location was the site of two almost identical accidents, in 1883 and 1933, in which the locomotive plunged to the foot of the cliff leaving the bulk of the train remaining on the track. The locomotive crews were killed in both instances. The topography at this point is demanding, as the existing coast road at a higher level had to be accommodated, as well as a working mine.

The line was extended from Barmouth to Pwllheli via Porthmadog (then Portmadoc) in 1867, the year after it was absorbed into the Cambrian Railways. The company's correct name - as in the five Acts of Parliament it obtained during its life - was spelled Aberystwith: widespread erroneous use (including even the above cited reference) of the modern Aberystwyth spelling stems from mis-transcription in official records, now online.

The majority of the line is currently open except the line between Morfa Mawddach and Dolgellau which closed on 18 January 1965. A ten mile (16 km) section between Barmouth Junction and Dolgellau is also used as the Llwybr Mawddach (or "Mawddach Trail"), a cycle route and bridleway. Conversion of the trackbed to a path was incidentally assisted in 1976 when heavy floods washed away most of the remaining ballast. This section of the line featured in the BBC's Railway Walks series with Julia Bradbury.

The town grew around the shipbuilding industry, and more recently as a seaside resort. Notable buildings include the mediaeval Ty Gwyn tower house, the 19th century Ty Crwn roundhouse prison and St John's Church. There is also a new Lifeboat Visitors' Centre, where visitors can purchase souvenirs, and take a look at the RNLI lifeboat from the viewing gallery. The busy harbour plays host to the annual Three Peaks yacht race. The famous mountaineer and sailor Bill Tilman lived in Barmouth for many years.

Barmouth Bridge, which takes the Cambrian Line over the River Mawddach, was also formerly at the end of the GWR Ruabon Barmouth line, which passed through Bala and Dolgellau. The southern end of the bridge is now the start of the Mawddach Trail, a cycle path and walk way that utilises the old trackbed.

Ferries sail from Barmouth to Penrhyn Point, where they connect with the narrow gauge Fairbourne Railway for the village of Fairbourne.

William Wordsworth, a visitor to Barmouth in the 19th century, described it thus: "With a fine sea view in front, the mountains behind, the glorious estuary running eight miles inland, and Cadair Idris within compass of a day's walk, Barmouth can always hold its own against any rival." 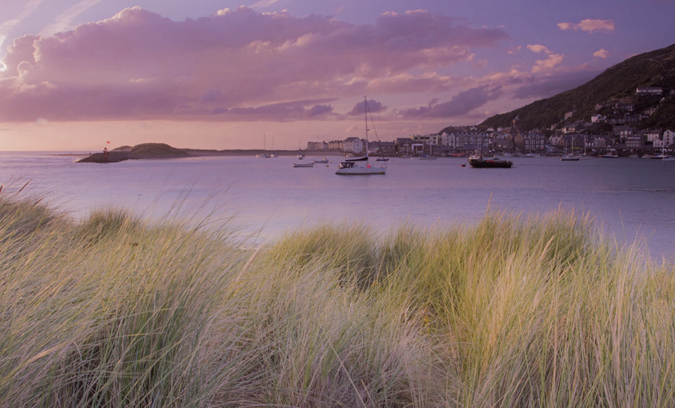 Fairbourne is a village on the coast of Barmouth Bay to the south of the estuary of the River Mawddach in Gwynedd, surrounded by the Snowdonia National Park and perched precariously at sea-level on the reclaimed ‘morfa’ or marsh-lands beneath the cliffs at the foot of Pen y Garn.

Before the seaside resort was built the coastal area was known as Morfa Henddol, while the outcrop now occupied by the Fairbourne Hotel was called Ynysfaig. Fairbourne was founded as a seaside resort by Arthur McDougall (of flour making fame.) During McDougall’s development of Fairbourne (which was originally to be called South Barmouth), a narrow gauge tramway was constructed to serve the building works.

The Blue Flag beach at Fairbourne is a two mile stretch of beach, backed by steep pebble banks, which exposes a vast amount of golden sandy beaches from mid-tide level. At the northern end the beach joins the Mawddach Estuary, while at the southern end of the beach is squeezed between sheer cliffs and the sea. The beach is an attractive venture for people exercising their dogs, however, during the summer months there is a dog ban enforced on the central area. There is sufficient access to the beach for those visitors with prams and/or wheelchairs, making this a welcoming rural location for all.

The beach is fronted by tank traps known as "Dragon's Teeth" dating from the Second World War.
Next
Previous