A trip to Sand Bay

I was drawn to a trip to Sand Bay by a copy of Outdoor Photography magazine, OP having featured it as a place to visit for some fantastic landscape photographs.

What I hadn’t realised before setting off on a warm summers afternoon was that (a) Sand Bay was not a good name for a massive mud flat and (b) it was an unbelievably dangerous place to photograph, highlighted by the fact that the first sign I saw was “Caution, Sinking Mud”.

Not much in my life has put my off taking photographs, but suffice to say, “Danger of Death” and “Sinking Mud” usually put me on red alert. Had Mud Bay not been about 120 miles from home, I would have most likely turned around. However, it was and I wasn’t going anywhere! 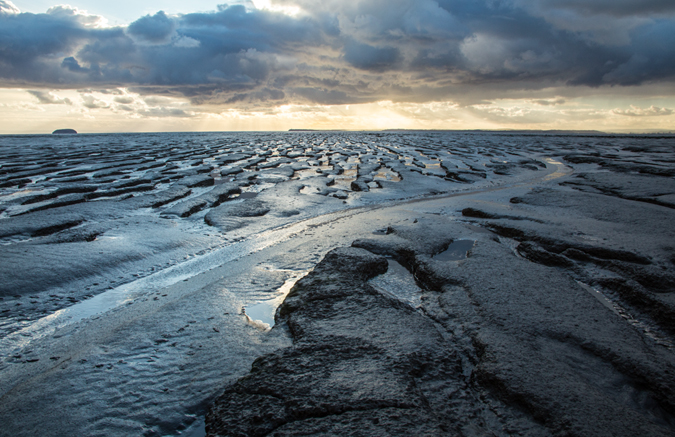 In many respects Sand Bay is a hard place to photograph. It is dangerous, getting out into the middle is hard work, and positioning yourself once there is treacherous. However, compositionally it has all the visual aids you require. Lead in lines a plenty, plenty of foreground interest and a bit of background too.

Once I had got a grip of my nerves, I managed to forage around and find some good spots, low to the ground to take the shots I was looking. Time was against me in that the tide was coming in at the same time as the sun was going down, but, after both holding my nerve and taking a number of shots, in particular those which provided great reflections, I managed to get some great shots of Sand Bay and the glory of those mud flats. 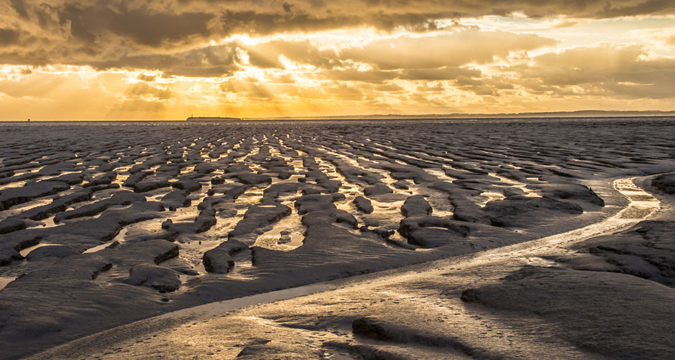 For those of you thinking of going, I have the following advice, if you venture into the middle of the bay, be careful, don’t go alone and if you have to go, make sure you tell someone you are going there, it really is a dangerous place so take care.

As is customary with my photo trips, it was obligatory to find a Good Pub to unwind at, and, to my delight I stumbled across the Golden Heart in Brimpsfield. Lovely atmosphere, great beer and a nice bite to eat made it the perfect end to a knackering day! I would thoroughly recommend it, whether covered in mud or otherwise.

Here is a bit more info on the area of Sand Bay from http://www.touruk.co.uk/north-somerset/kewstoke.htm

Sand Bay, bordered to the north by Sand Point, has views up and down the Severn and over Woodsprung Priory, sheltering in the lee of Sand Point. The local geology, boasting nationally important volcanic rocks, has attracted visitors for over 200 years.

Sand Bay is noted for its bird population, sand dune communites and saltmarsh. Since the 1950s the northern end of the bay has become overgrown with spartina grass, originally planted to protect a tributary of the Bristol Channel further upstream.

In the 1980s the level of one part of the beach was raised to prevent flooding by pumping sand from the Bristol Channel. As a result the beach now has two levels, the original height near the sea and the higher level beside the road. Sand Bay is a popular bathing beach with good water quality.

Sand Point and Middle Hope form a large headland reaching out into the Bristol Channel to the north of Kewstoke. Owned by the National Trust, the headland boasts the largest complete set of Black Rock Limestone in the South-West and supports rare wildlife including the Cheddar Pink, Somerset Hair Grass and an introduced colony of Glanville Fritillary butterfly.

Good coastal walks along this promontory, which also has archaeological sites dating from the Bronze Age to World War II. A line reaching from Sand Point to Lavernock Point in South Wales marks the lower limit of the Severn Estuary and the start of the Bristol Channel.