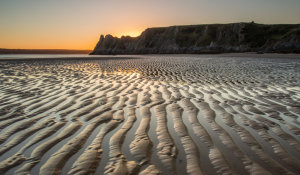 Lead in to the Cliffs
Three Cliffs Bay is a beautiful bay on the south coast of the Gower Peninsula in the City and County of Swansea. The bay takes its name from the three sea cliffs that jut out into the bay. The bay is part of the inlet of Oxwich Bay.

At low tide, Three Cliffs Bay forms a continuous sandy beach with Oxwich Bay beach to the west. In this regard, the bay itself is formed of a number of individual beaches - Pobbles Bay to the east of the three cliffs and Tor Bay to the west. The beaches are separated at high tide but are accessible to each other at low tide on foot over the sands (although take care, conditions soon change). 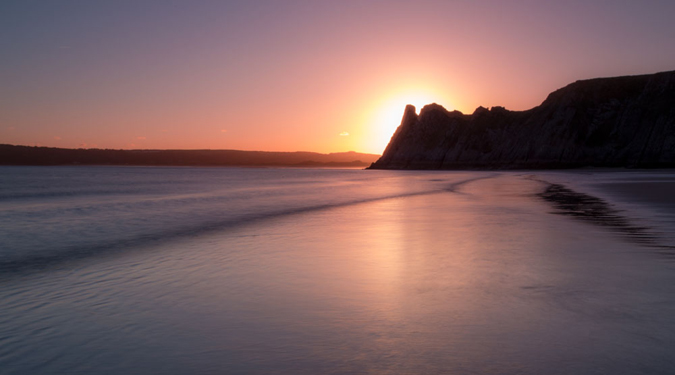 However, my relationship with it hasn’t always been so affectionate. As a kid I was dragged there against my will and without as much as a say in the matter. However, notwithstanding I would rather have been playing Match Day II on my Spectrum 48K, if I had to be dragged to one beach it would always be Three Cliffs Bay. It had its own medieval castle, had some cliffs which had their own name and had plenty of space for me to hone my Cruyff turn and Boycott forward defensive.

I parked at the holiday park and wound my way down following the curve of the estuary. Once on the beach, I realised the tide was further away than Bristol so there wouldn’t be much I could do with the Three Cliffs. However, the sun was starting to set over Oxwich and the far side of the bay was being lit beautifully by the sunset as were the cliffs and the ripples of water.

Adopting various positions along the bay and thinking how, compositionally, I might make the sunset work, I took a variety of shots using the lead in lines of the ripples or the vast outlet of rock as my focal point. It was one of those days where patience and a dry cloth proved invaluable. However, in my view, those two attributes bore fruit and I left TCB extremely happy, if not looking forward to the massive yomp up the hill to my car. 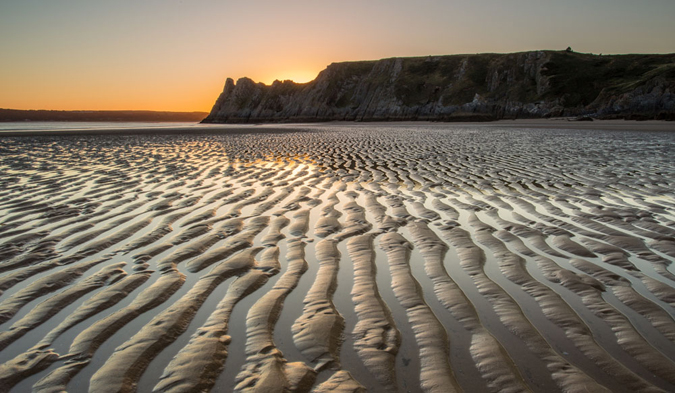 Another trip home needs another pub. As it goes, I was staying in a hotel in Swansea to avoid the massive drive home late at night. So, I went back down memory lane and revisited the King Arthur Hotel in Oxwich, http://www.kingarthurhotel.co.uk/pub/ - In my day it was good for coke and a bag of crisps, being 10 n’ all, but being big now, I allowed myself a pint of Timothy Taylor, washed down with a half of Timothy Taylor and the customary crisps and dry roasted peanuts. Incidentally, to the dog who seemed to eat most of my crisps the moment my back was turned… I know where you live!!!

“There’s a bit of everything: the sea, the cliffs, the salt marshes, a meandering stream curling down to the sea – and Pennard Castle, an 800-year-old fort tucked behind the beach…

It may seem a strange thing to say about a beach, but to me Three Cliffs always feels so intimate and cosy. It gives me the feeling of being hugged. I take friends there whenever I’m home, and every time I’m struck by the magic of it again. It still takes my breath away...”

I should also not forget to say it is also “one of the top 4 views in Britain no less!!(In accordance with the well known competition, Britain's Favourite View contest, ITV)” 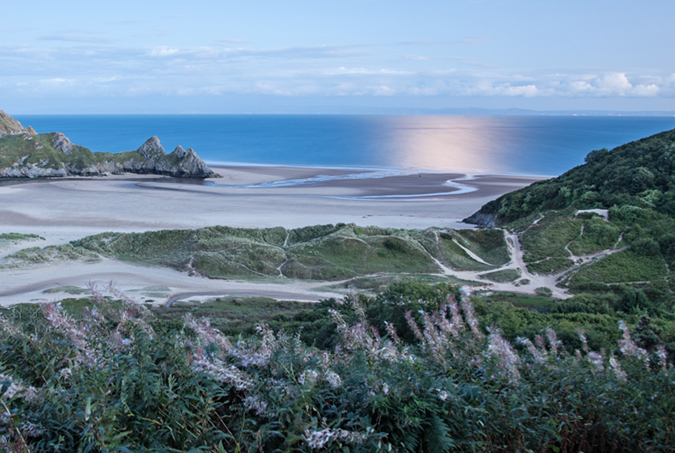