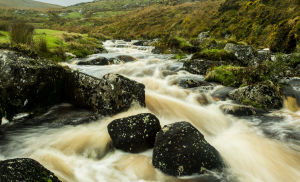 I don't know much about Dartmoor save that on the one occasion I did go, we nearly got ourselves unbelievably lost and trapped in the mist... Fortunately, through more luck than judgement, we managed to find our way out, but the place, as a result, has always left me feeling somewhat nervous.

Nervous or not, it's a beautiful wilderness and a paradise for landscape photographers. As I didn't have much time to spare on the day, I decided to focus on capturing one of the many waterfalls out there on the moors and after researching where looked best (thanks must go to http://www.legendarydartmoor.co.uk/water_falls.htm for the very useful information before setting off), I set sail for Postbridge (smack in the middle of Dartmoor) for a walk along the East Dart River, this being the first of many photo trips on my journey to the South West of England (please see my other articles).

Owing to an extremely long call from one particular client, I got to Postbridge much later than planned. With the previous nightmare firmly in my mind I therfore took a cautious approach to my walk, speaking both to locals about the best route to the ‘falls and setting myself a strict time limit at which point I would walk back.

Whilst it started dry, but very very wet underfoot, the magical majesty of Dartmoor, or rain as I call it, started to fall in half hourly cycles. Whilst this was initially annoying, it proved is worth in the end with a couple of lovely rainbows appearing after a couple of showers. One of them was a double rainbow, which I don’t recall having seen before. 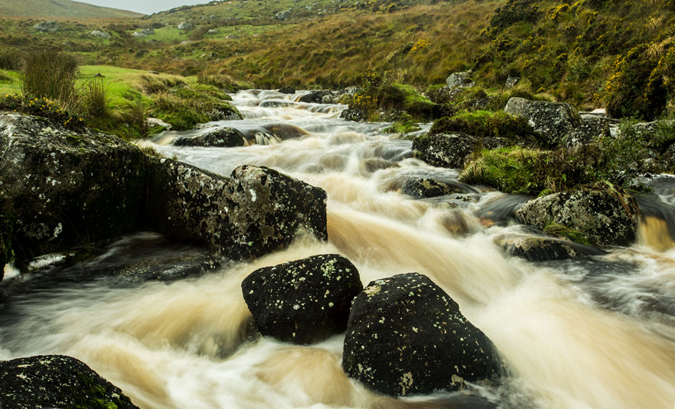 There was some lovely sights along the way but I didn't want to stop as time was tight and I had a goal to get to the falls, spend about an hour then get back.
The walk itself provided plenty of drama and unbelievably frightening moments. These almost exclusively came underfoot where, what looked like solid footpath, gave way without warning and I found myself knee deep in a mixture of mud, peat and water. The shock of suddenly being knee deep in peat was enough to scare the life out of me.

However, I'm made of hard stuff so soldiered on and was well pleased I did.

Once at the falls, I took a variety of shots from the banks (where they weren't flooded) and from in the river, where it wasn't a rip current. Changing the angle and trying different compositions and speeds I found that I was able to get some nice shots. However I was being limited by an increasingly flooded footpath and endless rain showers. 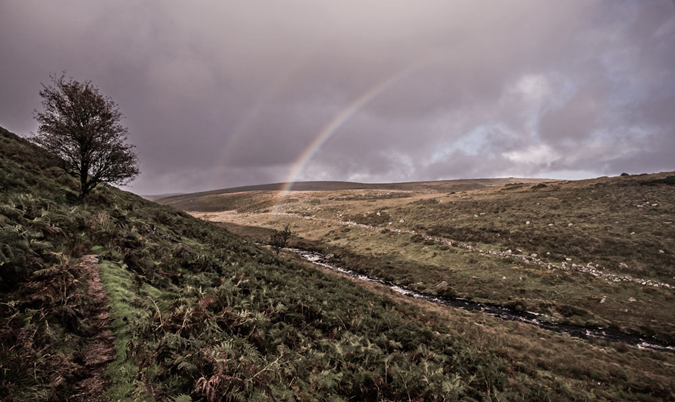 After about an hour and a half and about 50 photographs, it was time to avoid the peat landmines on the way home and so I headed back. It was a good thing I did for as I turned for home the rain started getting heavier and that Dartmoor mist appeared out of nowhere. However, unlike that awful first experience, this time the footpath was clear and the light was holding and moreover there was no danger I was going to be caught out twice!! Well not by the mist anyway – needless to say I fell knee deep a couple more times for good measure!!

Whilst I would usually sojourn to a pub for a beer en route back to Oxfordshire, this time, it was off to the nearest Inn and a bed for the night. I cant remember how I came across the Forest Inn in Hexworthy, but I was well pleased I did. Dinner Bed & Breakfast was £65 and each was marvellous, particularly the dinner (Home made burger). The beer was a bit hit and miss, but with more hits than misses I would give this a hearty thumbs up. I think it’s under new management and they appear to be making a good fist of it, so give it a go if you are in the shire.

After a good night’s sleep and a very good breakfast, it was time to head to St. Agnes... and you can read all about it in the next article.
Next
Previous