And on to Botallack... 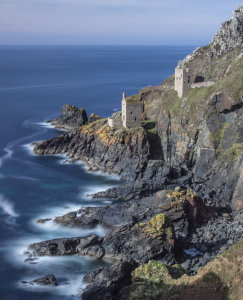 The Botallack Mine (Cornish: Bostalek) is a former mine in Botallack, Cornwall. It's a popular mine with tourists, photographers and national Trust members alike and is well worth the trip.

I hadn't been before but from the many great pictures I had seen, it was clearly a beautiful spot with dramatic scenery and those famous mines making the perfect focal point for any landscape photograph.

The village itself is in a former tin mining area situated between the town of St Just in Penwith and Pendeen. The location was flippin hard to find and whilst polite I didn't really sense the locals were desperate to help the Emmet find that damn side road. Eventually with those very useful OS maps being pulled out of the bag I found my way down and a windy lane and into a national Trust Car park.

The area itself is extremely picturesque but care is required as the hillside is steep. I often stare on in wonderment at the stupidity of some photographers working in extremely dangerous conditions and this location provided a fine example: two photographers in shorts and t-shirt, one wearing trainers the other, unbelievably, flip flops, climbing up and down difficult, step and perilous terrain. I couldn't believe my eyes. They on the other hand seemed to think it was perfectly normal and sensible. It isn't. Take care wherever you go near the coast and cliffs. Wear proper footwear and dress sensibly.

The gorge in which the mines are situated is quite narrow so it was portrait photos only in reality. I found a couple of locations to shoot from and with the sun in full glow I put on various filters at different times to diffuse it's power. In particular the big stopper came in very handy...

Whilst generally throughout this trip the tide was against me, in Botallack it was with me so I got a number of shots I was well pleased with the full drama of the sea and left feeling pleased with my half days work... Until I saw Mr and Mrs Flipflops again...

A bit more from Wikipedia...

Crown Mines, former tin mines, are low down the cliffs north of Botallack. There are two engine houses here and the mine extends for about 400 metres out under the Atlantic ocean; the deepest shaft is 250 fathoms (about 500m) below sea level.

The mine ruins in the area are protected by the National Trust. There are two arsenic works opposite the Botallack Mine count house. At the top of the cliffs there are also the remains of one of the mine's arsenic-refining works.

The mining developments around Botallack form part of the St Just mining district's successful inclusion in the Cornwall and West Devon Mining Landscape World Heritage site which was approved in July 2006.

Next stop the Bedruthan Steps... Which you can read in my next article.
Next
Previous