12/10/2013
The sun setting over the dramatic Cornish coastline 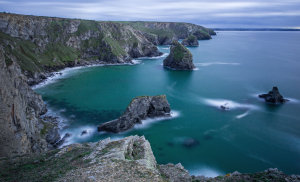 There were two things I wanted to photograph whilst in Cornwall. One was Godrevy Lighthouse, the other were the Bedruthan Steps. Like so many destinations in Cornwall, I didn't find it at first, but soon got the OS map out and found the National Trust car park I was looking for.

The Bedruthan Steps are part of a stretch of coastline located on the north Cornish coast between Padstow and Newquay and is part owned by the National Trust.

A popular attraction for tourists, painters and photographers the weather was set fair for a lovely sunset. Unfortunately, the tide was set to unfair, as it was fast approaching high tide as I got there and want set to go back again until well after sunset.

However, high tide or no high tide this is a spectacular location with great views from on high. However, it is also a great location for people who love heights and I'm not one of them! that said armed with a camera I suffer less from vertigo and therefore the first place I stopped was towards the far side of the cliffs/ steps which have me a great view back towards Newquay.

Whilst the sun was going down, I spent the first hour photographing with the big stopper as worth so much beautiful clear blue green water about I wanted to freeze the moment and soften the fairly rough surf.

My day was soon sent into turmoil when some absolute eejit told me that the National Trust Car park I had parked in was closed. Gate down. No chance of going home. Stuck. In. The. Middle. Of. Nowhere. Whilst I'm currently packing 14 plus stone, I packed my bag and got moving quicker than Ben Johnson on speed. And then it dawned on me. It couldn't be closed and the dwad I had been talking to was clearly an absolute berk.

Out of breath and wheezing like an old man, I regathered my composure, stopped to change my top and headed back to my destination.

By this time, the sun was truly setting. I found an interesting v shaped formation cut into the rocks to position the camera and started shooting. Ultimately I didn't get as good a shot as I had hoped but I was well pleased to have seen the sun set in a gorgeous rugged truly Cornish location - I did however get some nice shots from the period before Cro-Magnon Man turned up.

I might add that there are some very steep steps which allow you to go down to the steps at Bedruthan. However, they extremely hazardous so take care particularly in low light.

Next stop Perranporth and a bed for the night...
Next
Previous