Godrevy, the Island and that Lighthouse

I love a good lighthouse and Godrevy is as good as they come when it comes to the setting, the scenery and for the sheer drama of it position on a rocky outcrop.

Like so many landmarks in Cornwall, it is a well photographed location that attracts a number of photographers. Accordingly, I decided to get there early doors to avoid the hullabaloo of a thousand people wearing their latest Canon and Nikon camera, many of whom don’t seem to know one end from the other. 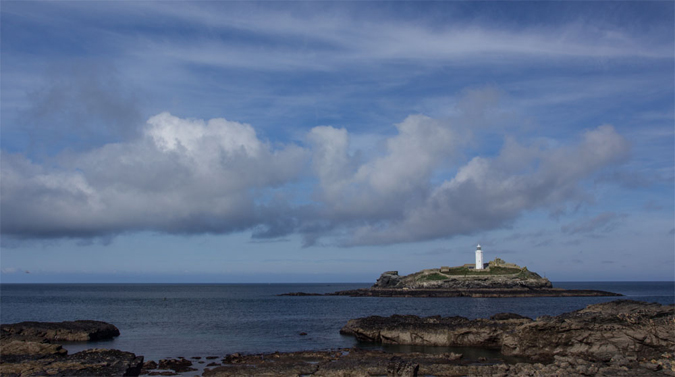 Save for a Labrador I later found out to be called Colin, and his owners, Trevor and Simone, I was pretty much first on the beach. Whilst I had seen lots of photographs of Godrevy, I hadn’t seen any of the vast expanse of golden sand which greeted me as I stepped out of the carpark and over the gulley leading to the beach. It was absolutely gorgeous and worth the visit alone (which is just as well as I needed something to compensate for the frankly laughable car park prices which as a couple of locals pointed out are totally disproportionate to the sums they earn (unlike the emmets…)).

I had assumed that the Lighthouse itself would be pretty straightforward to photograph, but alas, like all good landscape locations, it took some clambering, slipping and a couple of hairy moments to get to my chosen position which itself took a bit of fine tuning and careful tripod positioning.

Once there, and moving around a little, taking a variety of pictures from the straightforward to a handful of long exposures/ ND Grad exposed pictures. Whilst I was pleased with the outcome I would have benefitted from a bit less or more of a tide and slightly less strong sun (not expected in October!).

Overall I was well pleased with the outcome but I would like to return as it’s one of those locations which I think I am the better for having had a dry/ slightly wet run.

A bit more from Wikipedia…

Godrevy (Cornish: Godrevi, meaning small farms) is an area on the eastern side of St Ives Bay, west Cornwall, England, United Kingdom. Facing the Atlantic Ocean it is popular with both the surfing fraternity and walkers.

It is part owned by the National Trust, and offshore on Godrevy Island the lighthouse is maintained by Trinity House which is said to be the inspiration for Virginia Woolf’s novel To the Lighthouse.

Godrevy lies within the Cornwall Area of Outstanding Natural Beauty and the South West Coast Parth runs around the whole promontory.
Next
Previous