It's the End of these Lands as we know it 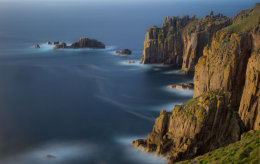 Nothing annoys me more than going on a photoshoot without enough change for an overpriced Car Park. At circa £3 Lands End was no exception on the overpricing front.

3 quid was 30p more than I had on me! Therefore, and having no choice, I approached a chap listening to Mozart in his car and asked if he could lend me the 30p I was short. Cue a rant about how the pricing of these things was far too much for local folk and all done to make money from us emmet’s. After he calmed down, he actually explained quite how much the car parks cost relative to the local wage and how the Cornish Council have done nothing to introduce an exemption or at least a reduction for locals. Hving parked at a few in the period leading up to Lands End, he had a valid point and it is worthy of mention here.

I went to Lands End having seen many a great picture of the place in particular Enys Dodnan Arch. For those of you who have been living in a dark room for a while, Land's End is at the extreme south-west point of British mainland. The wild panorama of Lands End was once described by John Ruskin as an entire disorder of the surges... the whole surface of the sea becomes one dizzy whirl or rushing, writhing, tortured undirected rage bounding and crashing and coiling in an anarchy of enormous power and it was a bit of this anarchy which I was hoping to capture. 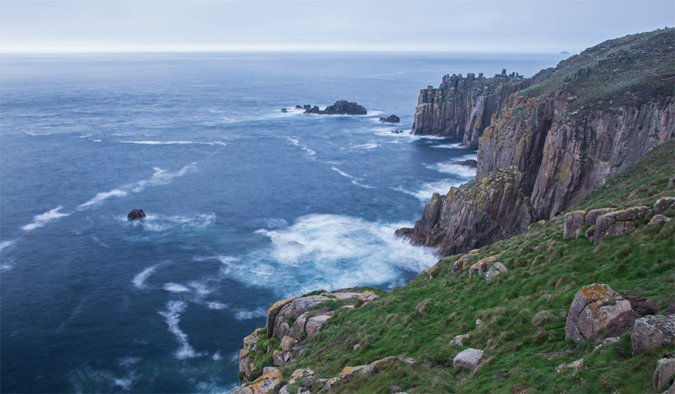 Unfortunately on the Enys Dodnan front, I wasn’t sure which way to turn, and, mores the point, I was running out of time and light, so after a quick reconnaissance mission, and undecided whether to go left or right, I went down. Going past signs that say do not pass, danger of death is alwys slightly unnerving but the danger of death seemed manageable and besides, it would save me 30p if I didn’t make it back!!

So off I went and was delighted with the view I got. In front of me was Longships Lighthouse, to the right was the beauty of the Cornish coast stretching for miles and miles into the distance. As the sun went down the rocks and the setting sun formed a perfect symmetry which was a sight to behold both out to sea and along that rugged, dangerous and enchanting coastline.

… The headland has captured countless ships in its heavy seas or during poor visibility. Such disasters are rare nowadays, greater safety being afforded by modern aids to navigation. Among these aids to navigation is the Longships Lighthouse situated one mile out to the west of Land's End.

Leaving aside it was one mile away, I had a few other problems to deal with – First and foremost, not being able to get a big enough or stable enough platform to get a long exposure shot. Further, it was bloody dangerous and believe it or not I have terrible vertigo! So, I tried to compose myself and my camera which, rest assured with the wind blowing a gale was enough to give me a few heart attacks and a desire to live in a nice 3 bed in Slough!!

However, after much ado and a few mental bounces off the sea bed, I got, what I hope you will agree (with a bit of help from my ND friends) some lovely shots of the Lighthouse. 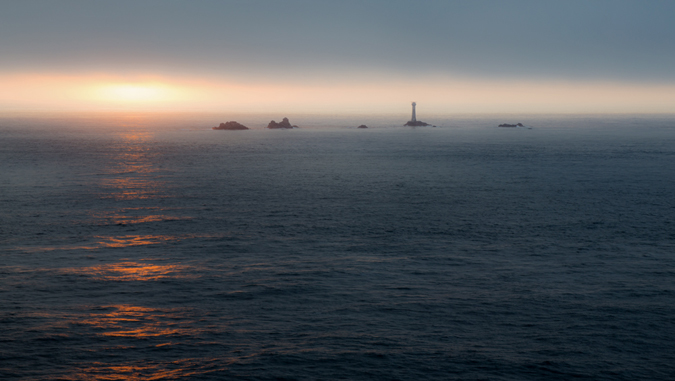 A bit more on Longships Lighthosue and Lands End from Wikipedia…

There are two varieties of granite represented at Land's End. Adjacent to the hotel the granite is coarse-grained with large phenocrysts of orthoclase, sometimes more than 5 in (13 cm) in length. To the north, at the First and Last House, there is a finer grained granite with fewer and smaller phenocrysts, and the different granites can be seen from a distance by the smoother weathering of the finer variety. The granite dates to 268–275 million years ago of the Permian period.

The contact zone between the Land's End granite pluton and the altered ?country rocks? is nearby and the Longships Lighthouse. 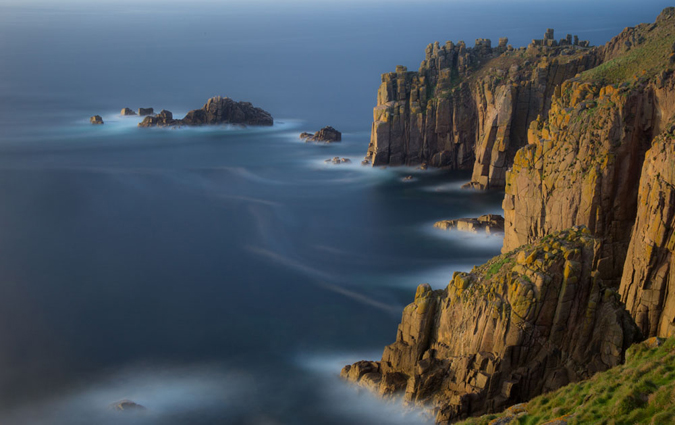 Longships Lighthouse is a navigation aid about 1.25 mi (2.01 km) off the coast of Lands End in Cornwall, England, UK. It stands on Carn Bras, the highest of the Longships islets which rises 39 feet (12 m) above high water level. The lighthouse has been unmanned since 1988.

The original tower was built in 1795 to the design of Trinity House architect Samuel Wyatt. The lantern was 79 feet (24 m) above sea level but very high seas obscured its light. In 1869 Trinity House began constructing a replacement. The tower was first lit in December 1873 having cost £43,870 to build. Even after these improvements, the S.S. Bluejacket was wrecked on rocks near the lighthouse on a clear night in 1898, nearly demolishing the lighthouse in the process.

The current lantern, which has a range of 11 nautical miles (20 km; 13 mi), emits one long five-second flash every ten seconds. Seaward flashes are white but they become red - due to tinted sectors - for any vessel straying too close to either Cape Cornwall to the north or Gwennap Head to the south-southeast. 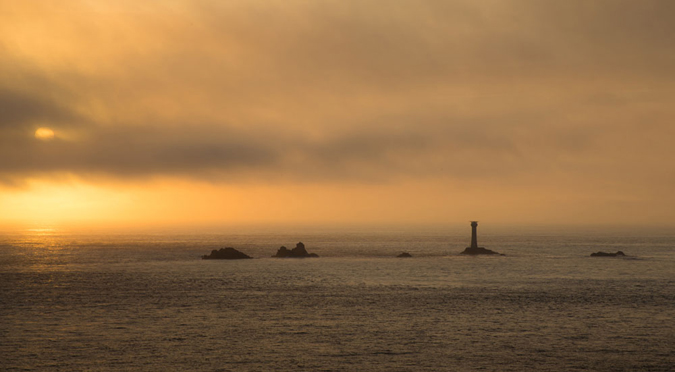