Marazion, the home of St. Michael's Mount, is one of the oldest chartered towns in the UK.

14/10/2013
Marazion, the home of St. Michael's Mount, is one of the oldest chartered towns in the UK - The first charter of incorporation was granted by Henry III in 1257. SMM is a rocky island crowned by medieval church and castle, still home to the St Aubyn family as well as a small community.

Any photographic trip around Cornwall inevitably requires a trip at sunrise to St Michael’s Mount. It is a much photographed place and I often prefer to go to places that aren’t bombarded by photographers taking photographs of places we have seen countless times.

However, given its uniqueness I didn’t feel I had any alternative but to be one of those countless photographers. Also, getting up for sunrise means I wasn’t going to be one of the many, but one of the few.

As it happened, I was 1 of 1. Sadly, the clouds were one of many and I didn’t get anything like the sunrise I had hoped for. Therefore, after trying to make the most of what sunrise there was, I decided to revert to the trusty 10 Stop ND.

Sadly, my timing was a bit out – the tide was coming in, so I didn’t get the world famous walk way. However, the top of the walkway was visible, and that provided a good lead in line for the shots I took.

After an hour or so, I realised that I was blocking the queue for the boat and that was my queue to make like a tree and get out of there.

It’s a lovely spot – I would recommend going at sunrise before the crowds arrive – and whilst popular there is a reason for that – go have a look, it’s worth a butchers. 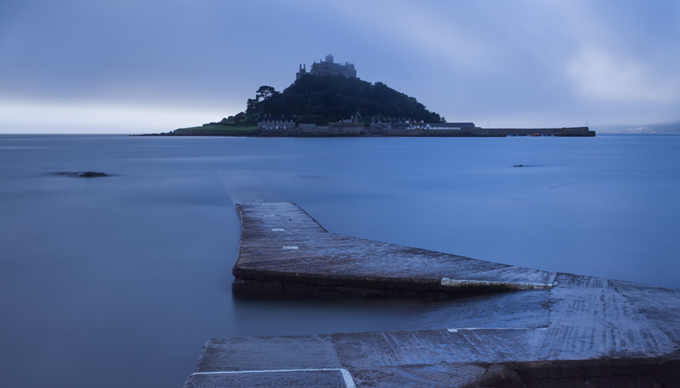 According to Marazion.info, Marazion attracted pilgrims to the Benedictine Monastery on St Michael’s Mount from a very early time. Those visitors stayed in the town. George Fox, one of the founders of the Religious Society of Friends stayed in Marazion in 1656. John Wesley, of the Wesleyan church, preached here in 1789.

Fishing was an industry that provided an income for locals and although Marazion did not have a harbour at the time the one on St. Michael’s Mount was used to land the catches. For centuries, tin and copper were exported from both Marazion and St. Michael’s Mount by traders and shippers. The town was surrounded by mines, such as Wheal Prosper, Wheal Crab, Wheal Rodney, Tolvadden and South Neptune. These mines remained active until a depression struck the industry in the late 19th century.

Agriculture remains a major industry. The warmer winters mean potatoes and brassicas can be harvested early in the year. And daffodils are grown for their bulbs, adding a splash of bright colour to winter landscapes.

Today, Marazion is one of Cornwall’s most popular tourist destinations. Nearly 300,000 paying visitors climb up to St Michael’s Mount every year with thousands more just taking a stroll to the island.

According to the National Trust, St Michaels Mount is believed to have been a trading post from the earliest times, becoming an important port by the Iron Age. It is generally believed the St Michaels Mount was the island of 'Ictis' where the Greeks traded for Cornish tin.

Edward the Confessor founded a chapel on the Mount in 1044 in a grant to the Benedictine Abbey of Mont Saint Michael in Brittany. Edward did spend much of his youth in Normandy and was greatly influenced by the Norman monks and intrigued by the symbolic similarity between St. Michaels Mount and Mont Saint Michael. The charter, held by the Monks at Mont Saint Michael may even have been a forgery, to strengthen the Monks claim on their possessions in Cornwall.

During the 12th century whilst King Richard I was on a Crusade in the Holy Land, the Mount was seized and held as a fortress by a group of his brother John's supporters. They were to be used as fortresses again in the Wars of the Roses and the Cornish Rebellion against Edward VI. The last occasion that the mount was used in a military role was in 1646 during the English Civil War. The Mount was held for a time by Royalist supporters, but was forced to capitulate to the Parliamentarians in 1646.

The Mount was bought by Sir John St Aubyn during 1660, and since that time it has had a peaceful existence.

During the 18th century the family established a permanent residence at St Michael's Mount, building a great new wing with impressive Victorian apartments which are decorated with fine plaster relief and furnished with some fine examples of Chippendale. The St Aubyn family retained of the ownership St Michael's Mount until 1964 when the property was given to the National Trust by the 3rd Lord St Levan.
Next
Previous