Walking into a literary timewarp

21/06/2020
A walk into Hardy and Swift for the Alphabet Project - Our Oxfordshire Alphabet project for 2020 - for the full gallery click here... 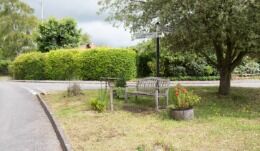 Letcombe Bassett
The Alphabet Project (see main page of website) continued with aplomb yesterday with a trip to Letcombe Bassett in order to complete letters J and L.

it's fair to say that I am not a big lover of Thomas Hardy or Jonathan Swift and therefore I had no idea that Letcombe Bassett had such famous literary connections. Thomas Hardy used Letcombe Bassett as the inspiration for "Cresscombe" in his novel Jude the Obscure and also used a small cottage in the village for Arabella's cottage. Swift on the other hand stayed in the the rectory for a few months in 1714 which is where he completed Free thoughts on the present state of affairs. It is also believed Alexander Pope visited him here during this time.

Whilst looking into the history of Letcombe Bassett it was interesting to learn that it was due to be closed down in 1948 because Berkshire Council (the village was formerly in Berkshire) deemed it too expensive to provide mains sewerage for the village and therefore it would be easier to close it down and relocate the residents.

Fortunately, the residents werent as keen as Berkshire council!! There appears to be a video on the very topic - http://www.britishpathe.com/video/shall-letcombe-bassett-die

With this project being about Oxfordshire and with such famous literary connections, it seemed fitting to to capture Arabella's cottage as well as the area around Letcombe Bassett to complete letters J&L.

The walk itself comprised Wantage, Letcombe Regis, Letcombe Bassett, various stud farms (the area is famous for its horse connectons) and then home via the Wilts and Berks Canal. It's a beautiful area with rolling countryside and lots of beautiful copse set atop the The Ridgeway. If you have the chance on a summer's day, it is a beautiful area to walk, picnic and, once the pubs open, have a beer in one of many pub gardens in the area. I'm told that Letcombe Brook iswhere local residents grow watercress which is sold far and wide.

As mentioned, the final leg of my journey featured the Wilts and Berks Canal. Sadly you won't be able to sail many barges down the stretch of canal I walked along given that it needs an enormous amount of work not to mention dredging. However, I bumped into a chap who worked for the local canal trust, who confirmed, to my surprise, that the Trust were undertaking that very work in autumn 2020. It struck me as requiring an enormous amount of time, money and work but he reassured me that the plans were very much in place which was great to hear.

As ever, I hope you enjoy the pictures. Similarly, if you have any comments please do contact me.
Next
Previous